A little clip showing Sophie and Cally, two of Dollars girls, when they met up a couple of weeks ago, a good time was obviously had by all. Thank you to their families for sending the pictures/video it is always nice to get the occasional update and photos/video are even better :-)
Posted by Jane Rowden at 01:12 2 comments:

Frankie update and Congrats to Galax 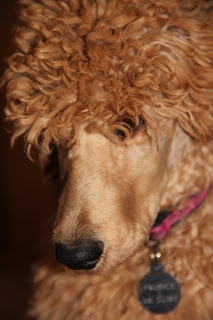 Frankie had her follow up eye check today, the news was as good as we could have hoped for. The vet confirmed what we thought/hoped, that as Frankie has grown the cataracts have remaind stable. This means that although her vision is very poor, she can see something around the cataracts (they cover 80% of the lens). I have to be very aware of any eye infections that she may pick up, but other than that she can carry on living a relatively normal life.

Although surgery would still be a dramatic improvement for her (her retina has developed normally and surgery should restore her vision) and obviously something I will hope to acheive should the funds become available, the vet followed this up by assuring me that she will still enjoy a good quality of life without the surgery. He also commented, on several occassions through the consult, about how well adjusted and confident she was, which is always good to hear. I am still hoping that the right home will be found for her. 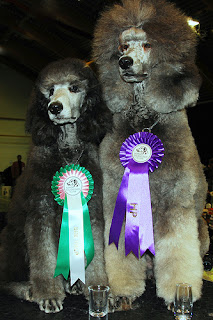 I had some very nice news form Monica regarding Galax who attended his first show last weekend, with Monicas older silver bitch,Tiana, who judging by her rosette also did well. Although this was a low key affair as he is still only a baby of 4 months, he got some very nice critiques on the 1st day of the show and then on the 2nd day he got best opposite sex puppy, a real acheivement especially considering he was 2 months younger than some of the dogs he was competing against. CONGRATULATIONS to you both.
Posted by Jane Rowden at 13:43 2 comments: 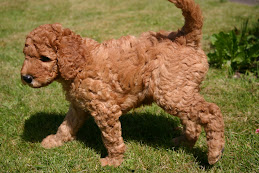